Pet of the Month

Pet of the Month: Nigel

A rat is probably not the first animal people think of when it comes to a pet. Actually, it is quite the opposite. Rats are affectionate, entertaining, and smart. They can be taught to use a litter box, return to their cage on command, and answer to their name. The rat is actually as smart as a dog. He can learn tricks and eat from your hand. If he trusts you he will not bite or run away from you. He will look forward to seeing you and playing with you.

Rats were the favorite pet of young girls in Victorian England. When the rat catcher Jack Black caught any unusually colored rats, he bred them to establish new color varieties. He would sell his home-bred domesticated rats as pets to “well-bred young ladies to keep in squirrel cages.”
The more sophisticated ladies of court kept their rats in dainty gilded cages, and even Queen Victoria herself kept a rat or two. It was in this way that domesticated—or fancy—rats were established.

Rats are sweet and good natured, if treated kindly. If one were to try to tame a rat that is not used to being handled, that would take time. They are instinctually afraid of people. But if you raise a rat with a good environment, good food, and a lot of love, you will get much in return. 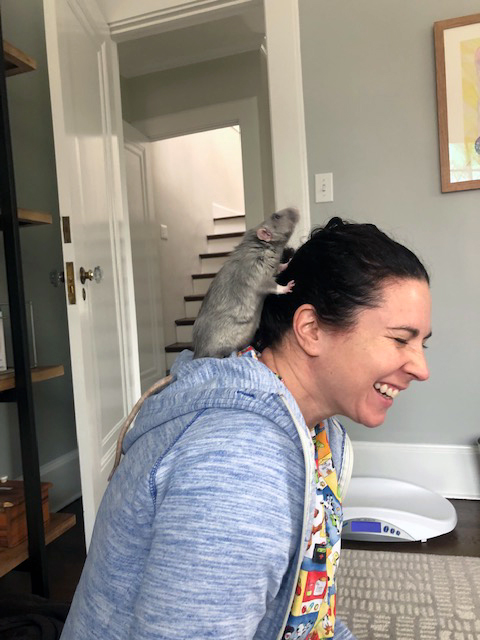 The empathy of rats has been studied by Inbal Ben-Ami Bartal at the University of Chicago. He placed one rat in an enclosure, where it encountered a small transparent container. In the container was another rat, wriggling in distress. The “free” rat learned how to open a little door to liberate the other one, and was very eager to do so. In another experiment, the free rat had a choice between a container of chocolate chips and another one with a trapped companion. The free rat often rescued her companion first, which suggests that her distress was more important than delicious food.

Rats do not have a long lifespan, but can live more than four years. I had a rat named Zach, who lived to be more than five. He was a laboratory rat rescued by me at the end of a science experiment.

The rat has a fragile respiratory system. Many of the rats I see suffer from infections which is usually pneumonia. He can get this from an organism carried by rat lice. In addition to treating for the infection, the rat is treated for the lice.

Nigel is the pet of the month. He is a young rat who has had several respiratory infections. These are thought to be caused by mycoplasma, an organism that can attack the lungs. It is hard to get rid of and may recur. At the first sign of any wheezing, I am aggressive with treatment. If untreated, this can lead to a very sick rat and can be fatal.

Rats also have a fragile urinary system. If fed a lot of high protein food, they can develop kidney disease. It is best not to overfeed your rat and to offer a lower protein diet. Don’t constantly fill the food dish as this can lead to obesity and kidney issues.

It is important to keep the cage clean, have plenty of fresh water, plenty of time to run around, and lots of interaction with people.

Rats get overgrown teeth, due to malocclusion. Their incisors continue to grow and if not positioned correctly this leads to very long teeth which must be trimmed in order for them to eat.

Rats also get tumors which should be removed and biopsied. They can occur on the skin or the mammary glands. They also get pituitary tumors; this can cause growth problems and hormonal imbalances.

Rats cry red tears but this is normal. It is a pigment that is naturally a red color. Many mistake this for bleeding. Rats may carry Leptospirosis if they are wild caught. This can be contagious to humans and can cause illness in both. If you take in a rat from outside, be sure to test for this.

Having a rat is fun. Many people get very attached to them. It is hard to explain until you have one of your own. Your well-cared-for pet will be a happy rat and give you a lot of joy.

Pet of the Month: Tyrone

Our operating hours fluctuate, so please call for availability and to schedule a housecall appointment.